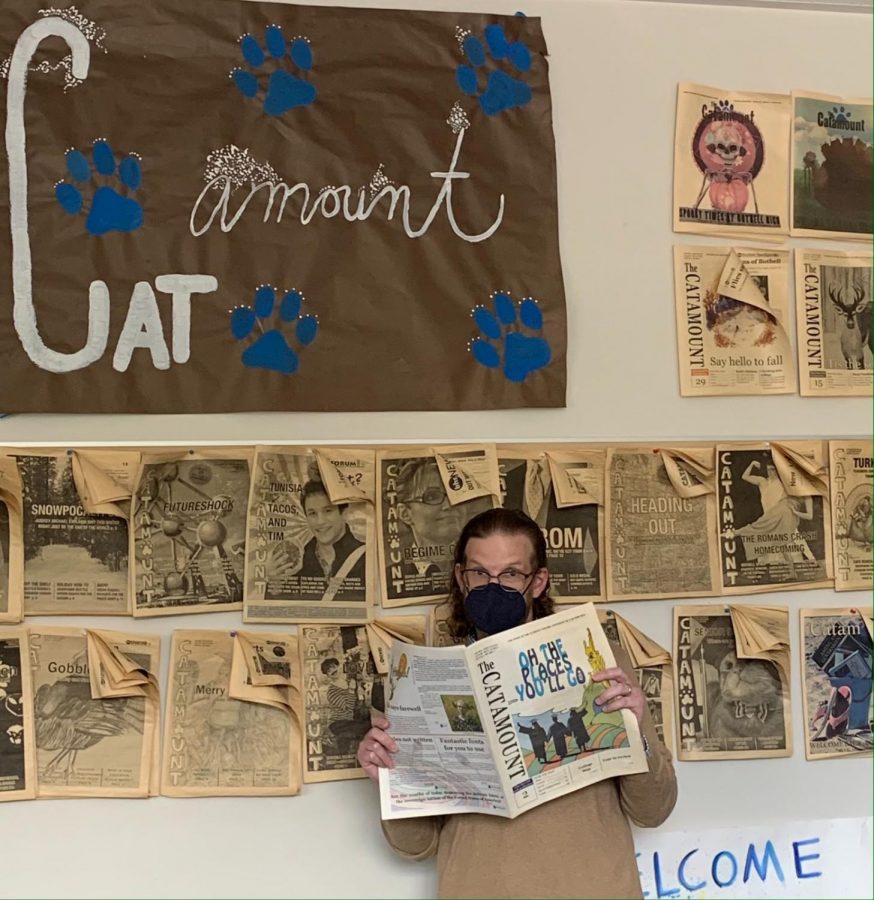 Mr. Crouch in the Catamount newsroom, surrounded by past issues and wonderful memories. Photo by Cyrus Comstock (24)

Be well, do good work, and keep in touch.

“I depart as air, I shake my white locks at the runaway sun,

I effuse my flesh in eddies, and drift it in lacy jags.

I bequeath myself to the dirt to grow from the grass I love,

If you want me again look for me under your boot-soles.”

Your eyes are burning holes through me

Greetings once again, Catamount readers. The editors of this excellent publication have kindly granted me this space, one final time, to ruminate. I shall, as ever, endeavor to do them proudly.

It has been a year of upheavals in all of our lives, and the Catamount has certainly not been immune. Unless the current allocation of resources changes over the course of the summer, this will be the final cycle of content that we will publish as an academic class at Bothell High School, at least for the foreseeable future. Starting next fall, the Catamount will (most likely) no longer exist as a for-credit course, but will continue to exist and publish as an after-school club.

I shall not pretend that I am pleased about this transition, gentle reader, especially since it means the end of my tenure as adviser. Due to my life threatening and unpredictable chronic illness, I will be unable to advise the Catamount in an after school capacity. I regret this, but I have also learned – the hard way, at times – to pay attention to my body and its limitations.

Since I took over the Catamount in 2010 from the legendary Mr. David Hansen, the program has grown and changed in innumerable ways. Perhaps most significantly, we have established and then expanded upon our online presence, including social media and our website – which has been the sole domain of this publication since last February. This has been driven almost entirely by the student members of the Catamount staff, to whom I give all of the credit for the paper’s transformation. I have been, and remain, completely amazed and humbled by the hard work and commitment of my newspaper students. I am deeply grateful to each and every one of you, past and present.

The slogan of the Catamount, printed on each cover since long before I inherited the program, is “The Voice of the Students.” That phrase has been my north star as adviser of this publication, and I have adhered to it as closely as I could. I have always viewed my role as adviser not as dictating the contents of the newspaper, but as one of assisting my student journalists in telling the stories that they wanted to tell. The Catamount is not, has not been, and should never be the voice of this institution – either at a school or a district level. It is, and must continue to be, the independent, occasionally irreverent, often imperfect, but truly representative voice of the students of Bothell High School.

I have also been, almost without exception, extremely well supported by the BHS administration, my colleagues on the staff, and the Bothell community. I was incredibly honored and deeply humbled to receive the 2017 Washington State “Adviser of the Year” award from the Washington Journalism Education Association, and this recognition was all the more significant because I was nominated by my student journalists. This was the greatest honor I have received in my teaching career. I remain deeply appreciative of your support and the opportunity to advise the student journalists of BHS.

My greatest hope for the future of this publication is that it represents an ever more diverse student body at BHS – in particular, giving voice to folks whose voices have often been ignored and silenced in our culture. I am optimistic that the Catamount will continue to reflect the voices of the students, and to hold a mirror up to our school and our community.

It is now the responsibility of the administration – at the district level, and especially, the administration of Bothell High School – to not only passively allow this program to continue, but to actively nurture it. Provide it with resources, with time and money. Promote it publicly. Engage with it in good faith. There has been a student-led newspaper at Bothell High School for nearly 80 years. I know that I would not want to be responsible for allowing such a rich legacy of student expression to simply perish due to neglect.

It has been my great honor and privilege to advise the Bothell High School Catamount for the past 11 years. As I look around the newsroom behind room 770, I am flooded with wonderful memories and immense pride in the work that my students have published in the pages of the newspaper and on our website.

And now, before (in the words of Uncle Walt) “I bequeath myself to the dirt to grow from the grass I love,” I say to you, dear reader, for the final time as adviser of this wonderful publication: Get off my lawn.