What is ASB Student Senate? 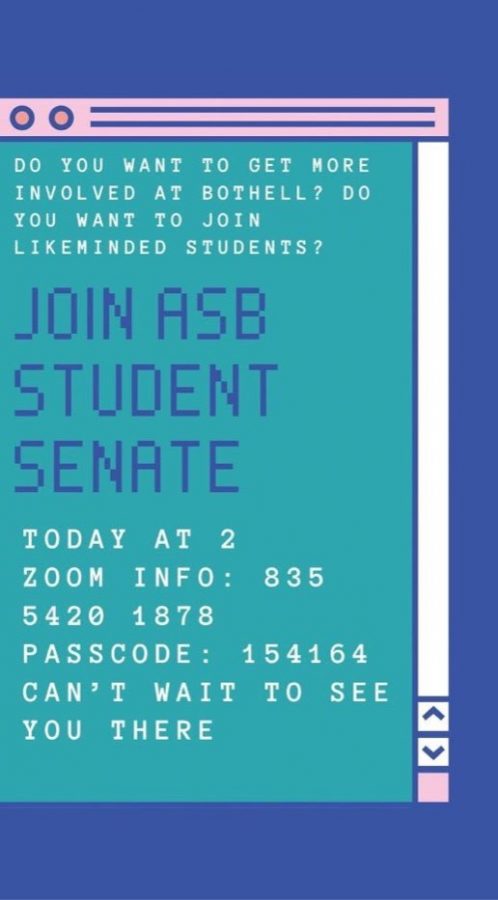 Every once in a while, on the daily announcements, a familiar but foreign event pops up to accompany birthdays and club meetings: Student Senate. I know what ASB is and I know what the Cougar Cast is, so what in the world is Student Senate? Meeting at 10am on Wednesdays, why would any student attend yet another zoom meeting on the morning of their day off? I had to find out.

I logged into the zoom meeting at 10:00am on Wednesday, March 24th. I was joined by Mrs. Fee, ASB advisor and activities director, several ASB students, and Diya Kumar, 8 participants total.

Mercer Nafe (‘21), ASB treasurer, began the third student senate meeting by discussing his cereal with the small but mighty group present. He then segwayed into a short slide presentation that highlighted some recent Bothell updates and news. Some of the topics that they covered included senior bingo night, wednesday resources, season 1 and season 2 sports, the virtual college fair, and senior commitments.

After Nafe’s presentation the group began an open forum for the attendees to ask questions and discuss any concerns. Being a very small group consisting of mostly ASB exec members, there was not a lot to discuss. Ryan Stroup (‘21), another ASB member, brought up his excitement for on-campus learning to begin and Fee shared that teachers and staff were expecting to receive a plan that day. Nafe then followed with a quick discussion about exec board elections that were coming up. ASB president, Brooklyn Harrel (‘21) brought up the mental health committee and what they were working on which reminded Fee of some very exciting news: Siya Sharma and Brooklyn Harrel had received the 2021 C.P. and Dorthy Johnson humanitarian awards for their work and contributions to BHS.  Fee rounded out the announcements with breaking news that the drumline was approved to attend the next football game.

The meeting was quite brief, 30 minutes tops, since I was the only person who had any questions. Although I would imagine that it would be much longer if there were more students present who had their own concerns to express.

Nafe tells me that his goal for Student Senate is to “just be here for students… it’s really just a place for if students need to maybe tune in and find out what’s going on at the school… or if they need something that they need that they need ASB to do…” in short, “this is just a place for them to come in and voice their opinion.” Stroup agrees that Student Senate is a space for students to exchange ideas.

Having only held three Student Senate meetings so far, there are inevitably a couple flaws that need some revision. Diya Kumar (‘22) was the only other non-ASB student present at the meeting that I attended. She says that “their agenda shows that they’re mostly focusing on sports and senior events.” As a student who heavily participates in the performing arts department that Bothell offers, Diya “felt super out of place.” Student Senate began as a place for club leaders and other student representatives to share their news and updates so Kumar’s advice to ASB is quite ironic, “[ASB] has to be more enthusiastic on involving everyone and promoting them so then kids from these clubs might actually feel like [ASB] wants their voice.” As ASB irons out the wrinkles and establishes the space and their routine, Student Senate has potential to be an extremely valuable resource for ASB and the collective student body alike. Never fear, any concerns from Kumar or other students are all things that ASB has been and will continue to work on. “We have a club liaison committee, we’re going to start working with them to try to pull more clubs into it just so we have more leadership in the school here that can voice their opinions” says Harrel.

Why should you come and join the student voice salad bowl that is Student Senate? Student voice is extremely important in the improvement of our school. If students don’t express their concerns to ASB then ASB won’t know to fix them. For students who have been asking for their voices to be heard, Student Senate is your chance! Even if you aren’t a student leader or a particularly opinionated individual “you can still come and learn and ask questions [because], especially right now, there’s a lot of people not really knowing what’s going on” Harrel says.

Are you thinking about attending the next Student Senate meeting? Typically they are held at 10am on the last Wednesday of each month. ASB shares the sentiment that 10am is not the ideal time for students but “it was really important to pick a time where we weren’t interfering with other clubs and sports so students could come because technically in our constitution there’s supposed to be a representative from every club here… and sport” Sydney Fee explains. You can expect to hear any updates about athletics, clubs, or other school events as well as any district news. That sounds a little intimidating but Nafe reassures that “it’s a low-pressure environment… none of us bite…”. ASB does a great job of trying to cultivate a casual and welcoming environment for students to come express any concerns or needs that they may have.

Harrel says, “try it out, you’ll never know if you don’t come. It’s a fun, easy environment! If you don’t like it, you don’t have to come back. But if you like it then bring your friends with you and we can make it a little party!” As Harrel put it, log in to Student Senate and make it a party cougs!

To join in on an ASB Student Senate meeting, look out for an announcement on the BHS instagram (@bothell.hs), on the morning bulletin, and the Cougar Cast!