The Best Pizza in Bothell 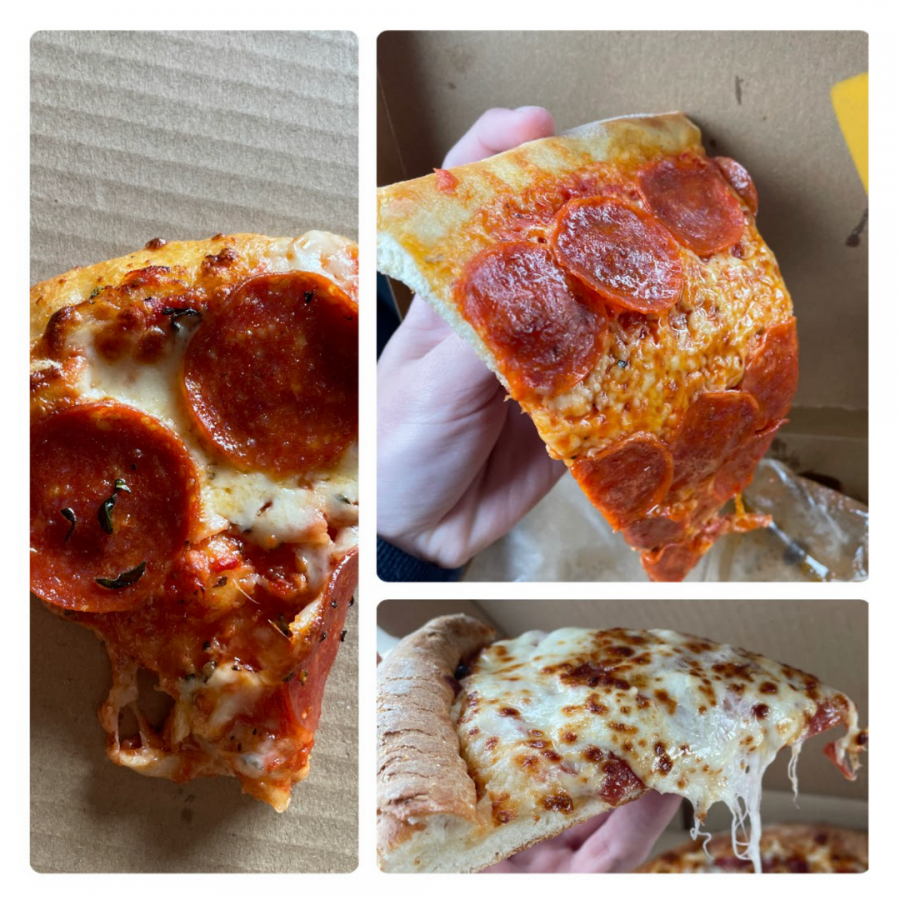 PIZZA PIZZA! Pizza is no doubt the best food in the world. No other food can you put pineapple and salami together and make it work. But that’s the thing with pizza— there are so many options. What store is the best to buy a great pizza and how do I eat it? One anonymous Bothell student feels overwhelmed when choosing pizza by saying, “There is too much pizza in this world to limit just one to being the best.” Don’t worry if you have those fears because we have an answer.

Tanner: I chose to get pizza from Sparta’s, MOD Pizza, and Dominos. In order to keep each pizza to a similar standard, Stone and I only got cheese and pepperoni as the toppings. Starting off with Sparta’s, an Italian joint just up the street from Pop Keeney, their service was very fast and I was able to leave with my pizza right when they said it would be ready. The cheese and sauce complimented each other quite nicely, with the pepperoni topping it off. Sparta’s cheese is definitely on the stretchy and stringy side, being a Danish mozzarella. There was a little bit more grease than I prefer, presumably due to the pepperoni, but nonetheless still a great pizza. The crust was neither soggy nor crunchy, which I prefer as it was easy to bite into but still held the pizza up well. For a total rating, I’d give the service a 9/10, sauce 7/10, toppings 8/10, crust 8/10, totalling 32 out of 40 points. Sparta’s all in all is a very solid pizza place, also offering other Italian meals like pasta dishes.

I next ate at MOD Pizza down in Canyon Park, and their service was top-notch as usual. There was a slight line when I arrived, but that moved very quickly and I was able to get my order in with very little wait time. The staff was all very friendly and energetic which fits the MOD vibe perfectly. As for the pizza, it was also top-notch. They are thin crusted cooked in a pizza oven, with the perfect amount of cheese and pepperoni to finish it off. Even though you wait for the pizza to cook, it doesn’t take very long as the pizza isn’t thick and cooks throughout nicely. For a total rating, I would give MOD’s service a 10/10, sauce an 8/10, toppings a 9/10 since they tasted super fresh, and the crust a 9/10 as well, totalling 36/40. MOD is much different than your average pizza place, as it’s almost like Subway, but for pizza. If you’re looking for a quick meal, MOD should always be on your radar as you will not be disappointed.

The last place I got pizza at was Dominos, and they were solid as usual. My favorite part of their pizza is the crust. It has a garlic/oil seasoning that goes perfectly with any pizza. Ordering online was super easy, and the estimated pickup time was right on. I’ve found that Dominos goes a little light on the cheese, but there was definitely enough pepperoni to make up for it. Their sauce tasted great as well, making the entire pizza delicious. In total, I would give their service a 6/10, mainly because I didn’t really have to interact with the people working there. As for the toppings, I would give it an 8/10 just because there wasn’t much cheese. With the crust being my favorite I would say 10/10, but I’m a little biased. As for sauce, paired with the toppings it would be an 8/10, but on its own, definitely lower around the 6/10 range. In total, Dominos receives a 32/40. They could have easily gotten a better rating in my opinion if they had more cheese, but otherwise Dominos was a great meal and I would definitely order from there again if I just wanted to eat some pizza and hangout.

Stone: For me I needed the classics and you can’t talk about local Bothell pizza without mentioning Uncle Petezas. Most popular for birthday parties and other big celebrations this local joint has been functioning for more than 30 years. First impressions of walking inside, it was a very welcoming staff and felt very homely as you walked in. And of course they were repping their Bothell High School with a giant Bothell sign on the wall. The price for a 12’ inch pizza was about 16.92 which includes a 2 dollar tip. For service I would give it about a 7/10 and the reason it was not higher is honestly because of the price (next time I could save a couple dollars by just getting a smaller size). The crust was sitting in at a 9/10, it has a very thick crust that feels like a breadstick and I prefer a bit more of a hard shell with a crunch. Sauce is a solid 8/10 nothing incredible but definitely makes each bite delectable. Toppings were GREAT in quality and felt fresh however the combination of the heavy crust and the thick amount of cheese rubbed me the wrong way for a 7/10. (Important to note that their pepperoni was below the cheese)  Overall this pizza clocks in at  31/40 because it was very great in filling me up within a few bites but because it is so thick the overall satisfaction is taken down a bit.

Zeeks pizza was certainly nice but there were factors that were not the best. First off, let me say if you have a lot of money to spend then this place might be right for you. Price was $14.34 including tip and the environment was almost perfect, even though there were very few people there. Clocks are around 7/10 and the reason it is not higher is just because a $14 pizza for a 9 inch pizza (no good budget options). Crust was good but a little bit too hard for me but clocks in around 9/10 with hints of a herb on top. Sauce was definitely nice but nothing extremely incredible for a 8/10. Toppings were very nice with fresh cheese and pep 8/10.  Overall this pizza deserves a 32/40 so it is good pizza (if you are not paying)!

Pagliacci was definitely a strong choice. This location was different because they had lunch options and it was about $3.75 a slice. I got about two slices, but if you really are hungry get 3-4 slices. The customer service was super nice and they were very passionate about their pizza. I got the pizza within 5 minutes making this a 10/10 service at an incredible price. The toppings were amazing which had very stringy pizza and great amounts of pepperoni. But the one drawback I had on the toppings were that there was a large amount of grease, which wasn’t unbearable, but it certainly made this pizza deserve an 8/10. For cust, I will be honest it was perfect. The crunch was there but when you bit into just the crust it felt light and airy at the same time. 9/10 just because there was an insane amount of flour on the bottom. Sauce was also incredible and you could tell it was well seasoned and very fresh, 9/10. All in all this pizza joint deserved a 36/40 worth a first visit! And also I strongly recommend their Margarita pizza.

Here is the moment of truth: what is the best pizza, well the best pizza ever is…. up to you. I know it’s not a satisfying ending but Tanner’s choice was Mod and Stone’s was Pagliacci! Let me say that if price is your number one issue then both of these places are certainly our top choice for cheap, quality pizza.  According to 32% of 152 Bothell students, MOD surely takes the win, followed by Uncle Petezas and Dominos. Both of us had no pizza that we absolutely hated, so make sure to check out a local pizza place near you and support a local business like Pagliaccis, Uncle Petezas or Sparta’s. The only pizza place I would not recommend is Chuck-E-Cheese (just trust me on that one)! Thanks for giving this a read and be sure to comment down below what your favorite pizza is!