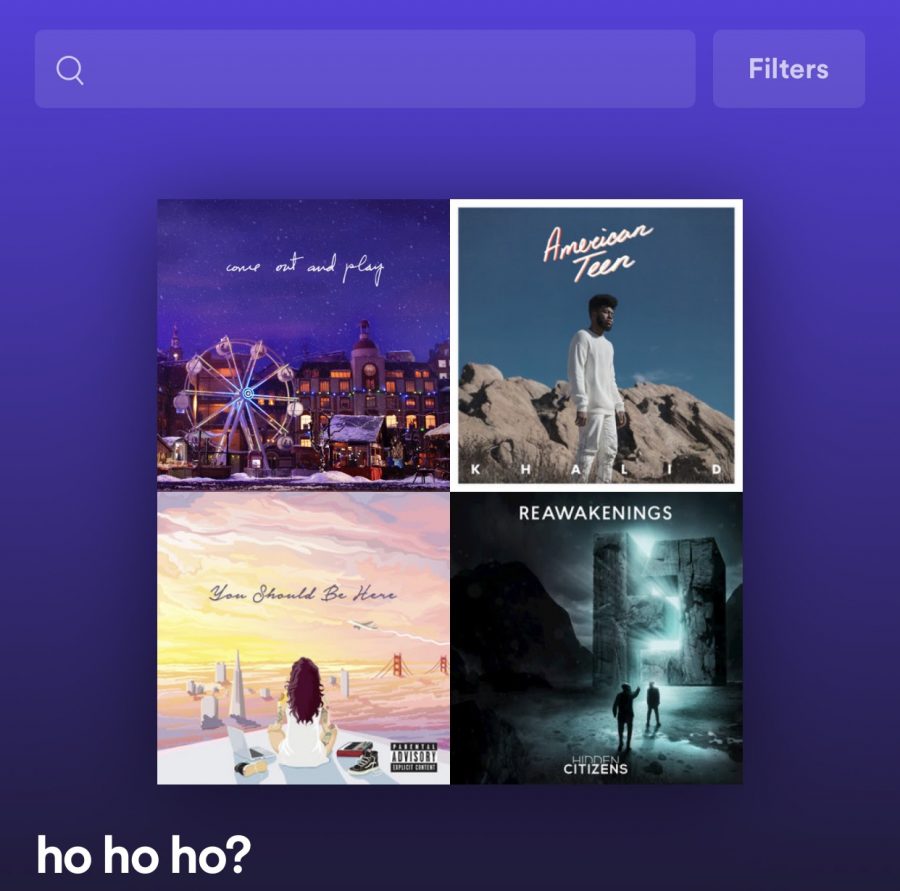 Come holiday season we all hear the same songs: “All I Want for Christmas Is You,” “Jingle Bell Rock,” “Let It Snow” (my least favorite song of all time), “Santa Baby,” etc. Well, I am here to give you some recommendations for songs with a holiday vibe that won’t annoy you after hearing them play just once.

come out and play~Billie Eilish

Everyone who has ever listened to Billie Eilish knows that her voice is absolutely one of a kind. This song makes me think of the time I went to  New York during the winter in 8th grade and even though it didn’t snow, I can imagine how magical it must be. “come out and play” has just the same magical, sad tone to it.

Khalid is a favorite artist of mine, which is evident with the money my mom spent so I could have his albums on vinyl, but until doing research for this article, I had no recollection of hearing this song of his. Immediately when I listened, it made me want to get up and dance and sing at the top of my lungs even though I didn’t know half the words. This song will make you feel warm inside even while it’s cold outside.

All of the versions of this song have very different vibes. The cover by Hidden Citizens, while absolutely awesome in sound, belongs more in an action film when the hero feels like everything is lost or during a slow-motion fight scene. The Bangles’ cover has a bit of a holiday feel due to the bells ringing in the background in the beginning before the drums and guitars come in but once they do that feeling is lost. The original song by Simon & Garfunkel is interesting in the way that the sound feels flat, almost as if they were far away, but it was a different time when this was recorded, so that makes sense. Gerard Way’s version of this song is similar to The Bangles’ in that it sounds like there are sleigh bells in the background at first. I’ll admit, none of these really have a holiday feeling to them, but they had to be included because of the title and just how incredible each version is.

I just recently started listening to Kehlani, and while this song doesn’t mention the cold, winter, snow, or really any type of holiday identifier like the others do, the message of the song is that “you should be here, with me”. With the current pandemic, this song felt like it let me get out a little bit of my sadness at the fact that I don’t get to spend Christmas the way I normally would; it’s just going to be me, my mom, and our cat. There will not be heaps of friends and family surrounding me, but this song makes me feel just a little bit better about that fact.

two queens in a king sized bed~girl in red

The instrumental intro of this song is absolutely adorable with its bouncy piano keys and bells in the background; this paired with girl in red’s monotone voice is jarring, but incredible at the same time. After having only played the song once, the second time I listened to it I already knew all the words.

The beat on this song was the first thing that caught my attention, especially paired with her very unique voice that just sounded like it was bouncing off of each note. The lyrics are very Pop music-esque, but catchy.

While this one is a typical Christmas song, Sasha Sloan’s cover had to be included on this list. The music in the background has a nice beat, and her voice is so clear and ethereal on top of it. I just loved listening to the way her voice sounded, I could hear every syllable of every word, and certain parts that sounded like she was whispering added to the whole mix.

Sabrina Claudio’s voice is a favorite of mine; it’s just so light and stunning. The name “Warm December” is perfect for this song because every time she sings that lyric her voice is so golden and smooth, I can’t help but think of melted chocolate. And her riffs are immaculate.

I immediately got alt vibes from this song the first seconds in, and marinelli’s voice reminds me of what your voice sounds like when you first wake up and it’s all scratchy. I’m an alt music kind of girl, so I really enjoyed this one.

Dana Williams’s voice is so unexpected when she starts singing after the instrumental beginning, I was a little caught off guard, but after I kept listening I really heard its beauty. The bright and nasally tone of her voice fits so well in this song and makes me want to cozy up by a fireplace with some hot cocoa.

This one wasn’t originally on the list, but when I was scrolling through Spotify, I accidentally clicked on it and once I did, I had to stop and listen. Her voice! It is so smooth and I love that she sings this in a lower tone. This song is definitely supposed to be sad, but it is so good.

If you want to have a listen for yourself, here is a link to my Spotify playlist with all of the songs above: https://open.spotify.com/playlist/4mTnIAT3E65nsVafgtOAVf?si=a7zX5KGERZS3jh1kDG0hJQ