A new video-game obsession is Among Us 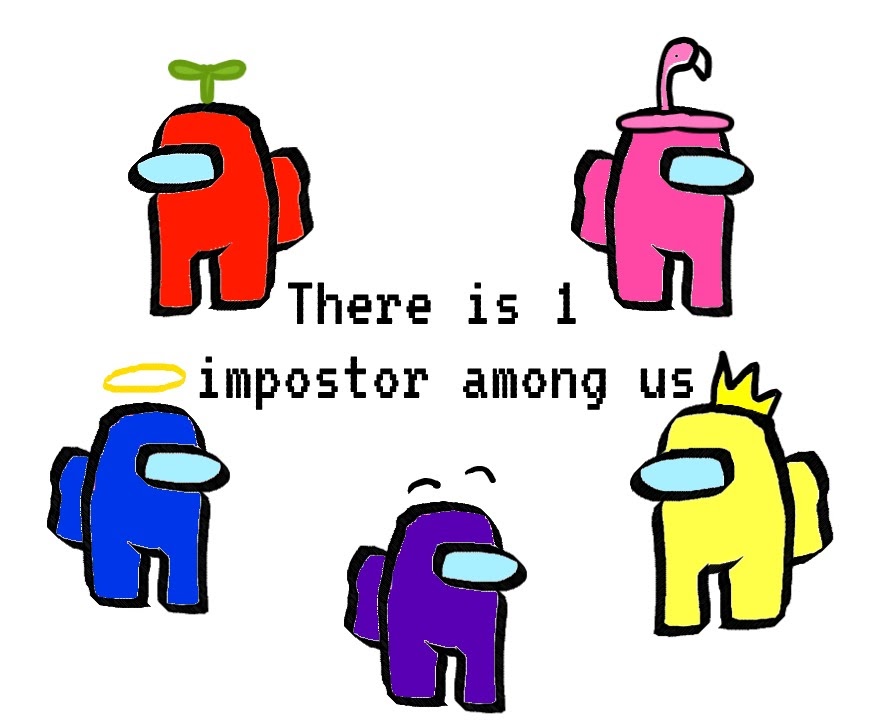 Little spacemen, mystery, violence, debate, and good old-fashioned video game fun. What else can you want from one of the most popular games in the world right now? “Among Us” is a game available on both mobile and desktop platforms and is currently a huge hit amongst teens… among us? I find myself engrossed in this game at multiple times a day and have found it to be a fantastic game to play with friends, at least as long as none of them betray you…

The premise of the game is simple, and very easy to learn- especially for those that are familiar with the good old sleepover game of Mafia. “Among Us” is based in one of three maps, but the most common is the “Skeld”, a spaceship of unknown origin. 4-10 people play in each round, with 1-3 impostors among them. The “crewmates”, the people that are not impostors, have two main jobs- find the impostor and finish their “tasks” to fix the ship. The impostor has more on their mind, since they must juggle trying to kill everyone else, not getting voted out, and sabotaging the ship.

The gameplay can range anywhere from full of strategy to complete chaos. As a game played with random people online of many ages, no one ever knows what each game will be like. Perhaps the impostor will be terrible, or they might be incredibly skilled. Maybe a crewmate is playing for the first time or maybe they are able to finish their tasks within minutes. The game is incredibly flexible, and although different strategies are always developing, the main gameplay does not generally change. In an average game, the crewmates will immediately head off to start tasks while the impostor looks for opportunities to kill crewmates. The impostor will often “fake tasks” during this time to try and convince the crewmates that they are one of them. The impostor can also use “vents” to teleport to different locations in the map and attempt to kill crewmates. When a crewmate finds a body or sees something suspicious, they can begin a meeting. These meetings last for varying amounts of time based on the settings of the game (preset by the host). In these meetings, crewmates and impostors will discuss what they have seen and attempt to vote people out based on who they believe is “sus”- a term that has grown in popularity along with the game’s popularity and means “suspicious”, or likely to be the impostor. The game can end in one of many ways: the impostor succeeds in killing or voting out all of the crewmates but one (impostor wins), the impostor sabotages the ship and no crewmates fix it in time (impostor win), the crewmates successfully complete their tasks (crewmate win), or the crewmates vote out all of the impostors (crewmate win).

“Among Us” was released by the local indie game company InnerSloth on June 15th, 2018, only exploding in popularity in September of 2020 due to many well-known streamers playing the game on Twitch. According to SensorTower, a website known for accurately tracking stats of mobile apps, the game was downloaded on mobile by 84 million players in September alone, and currently sits at number one on the Apple app store. Also able to be purchased through Steam, a popular place to download videogames, “Among Us” has dominated the Steam store, sitting at number one on the global top sellers list on September 27th and currently remaining in the top 5. A lesser known fact is that the development team, InnerSloth, is based in Redmond, Washington. Prior to this year, the 3-person developer team was most notably known for their game “The Henry Stickmin Collection”, now outshone by the insane success of “Among Us”.

In the current version of “Among Us” there are three maps: The Skeld, Mira HQ, and Polus. The Skeld is the oldest and still the most popular of the maps, and usually considered the easiest for crewmates to win based on the crewmates’ knowledge of the map and the cameras in many corridors. Mira HQ is the least used map and is the smallest. The impostor has a slight advantage in this map because there are no cameras and the vents are in isolated places. Polus is by far the easiest for impostors to win in, as it is much larger, has more difficult to operate cameras, has many isolated vents, and has both indoor and outdoor areas. Each map also has different tasks, and overall changes the game greatly.

As either the impostor’s best friend or greatest foe, the vents are notorious for their ease to get around the maps, but they also come with a risk. Only impostors can vent in this game, and if a crewmate sees an impostor venting then it is a pretty huge mistake. But for some players, the risk is worth the reward, the reward being a discrete way to maneuver around the map and get away from a kill as fast as possible. Every map has many vents, but most maps also have cameras that are specifically designed to show the vents. So if a crewmate is on cams when you vent… well, that could be the end of your killer spaceman career.

I am absolutely not going to name every task in “Among Us” because that would take a very long time. Essentially, these tasks are fairly simple and easy to catch onto. Most tasks will only take a few seconds, although some are longer. One of the biggest tricks of the game is the visual tasks, tasks that an impostor cannot fake. While the host can turn off visual tasks, they generally do not. This gives crewmates another way to judge whether someone is faking a task and allows them to prove their innocence. If all of the crewmates (including those who have died, and can complete tasks after death) finish their tasks, they win.

As “Among Us”’ popularity continued to grow, it seemed as though everyone joined in on the hype, and eventually it even reached members of the U.S Congress. Alexandria Ocasio-Cortez (aka AOC) and Ilhan Omar, two progressive members of the House of Representatives, teamed up to play “Among Us” together. The game was live-streamed on AOC’s Twitch channel, and by the other streamers the two played against. This was not AOC’s first gaming rodeo; the representative of New York has stated that during quarantine, she’s been playing “League Of Legends”, a popular MOBA by Riot Games, and has also enjoyed Nintendo’s “Animal Crossing: New Horizons” for the Switch. The congresswomen played alongside many popular internet personalities, including streamers Disguised Toast and Pokimane, and singer/tiktok star mxmtoon. Chaos and excitement ensued as the group continued playing, with AOC and Omar cleverly deceiving the other crewmates when being the imposter, or scrambling to discover who the killers were when playing as an innocent. The stream went on for 3 and half hours, and according to CNBC, at its peak it reached over 430,000 viewers, making it the fifth most watched individual Twitch stream.

“Among Us” was a game that rapidly grew in popularity, and with it, the issue of hacking often arose in public lobbies. Some of these included hacking to kill more people as an imposter, being able to impersonate other players to say whatever you want, or more innocently, giving “pets”- normally an addition that must be paid for- to other players for free temporarily. The small developer team was not prepared for the large amounts of people playing their game, and struggled to add measures to prevent these cheats. Although these issues were always prevalent, it became nearly unavoidable to players in public lobbies shortly after the AOC stream. As reported on by EuroGamer, a hacker by the name of Eris Loris created a bot that would spam public lobbies with messages saying for them to subscribe to his YouTube channel or have their devices hacked, often alongside the slogan “TRUMP 2020”. These hacks made the game unplayable for many, and as a result, InnerSloth released an emergency update to fix the issue momentarily. This update is not permanent as it will occasionally kick innocent players, and InnerSloth states that they are in the process of creating better ways to handle the hacking, suggesting players use private lobbies with friends they trust in the meantime. It seems for now that their solution has been fairly successful as the spam is much less common than before, but there is certainly room for improvement as the game’s development continues.

“Among Us’” popularity represents the need for interaction that has become so desperate during quarantine. The rise of a game that is built on communication with people- both strangers and friends- is no coincidence. In a time where many kids feel lonelier than ever, “Among Us” has provided a new way to stay connected.